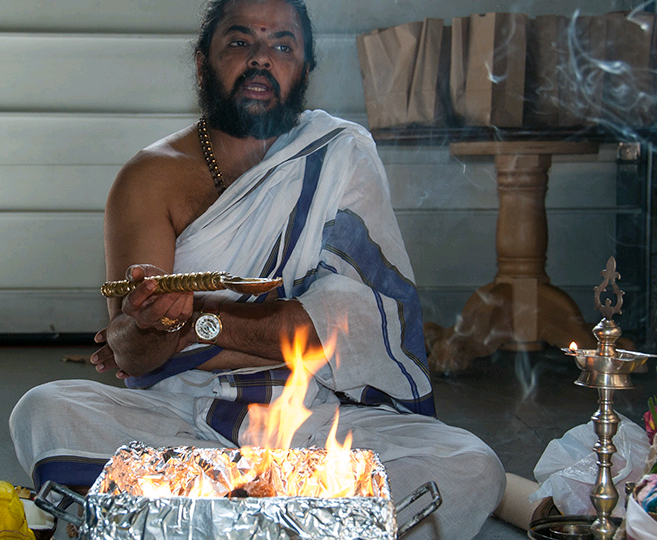 Sri Chandrasekara Gurukkal is the Founder and Chief Priest of Canada Sri Siva Satyanarayana Swami Temple, Mississauga, Ontario, Canada. Known for his exceptional ways of reciting Slokas with proper pronunciation and clarity as well as an ability to explain their meanings to an audience in style, Sri Chandrasekara Gurukkal hails from Vellore (Tamil Nadu, India). He studied Veda under Sri Thenali Subramaniya Sastrigal and Mayavaram Panchavatheeswara Gurukkal, in the traditional Gurukula-method of education. With a zeal to study further, he completed  successfully Sivagamam & Sastram under a rigorous & strict teacher, Sri Somasundara Sivachariar, and went on to become a Vedic and Meditation teacher himself. Later he joined Sri Iyyappan Temple at  Raja Annamalaipuram in Madras (India) as a Priest. He then joined Richmond Hill Hindu Temple in 1996 and served there until 2006. Sri Chandrasekara Gurukkal has a special affinity for Goddess Durga and specializes in conducting Chandi Homam, Kumbabhishékam, Brahmotsavam etc. Sri Chandrasekara Gurukkal is a scholar in Sanskrit and highly knowledgeable in Vedanta & Aghama Sastra, besides being a great personality.